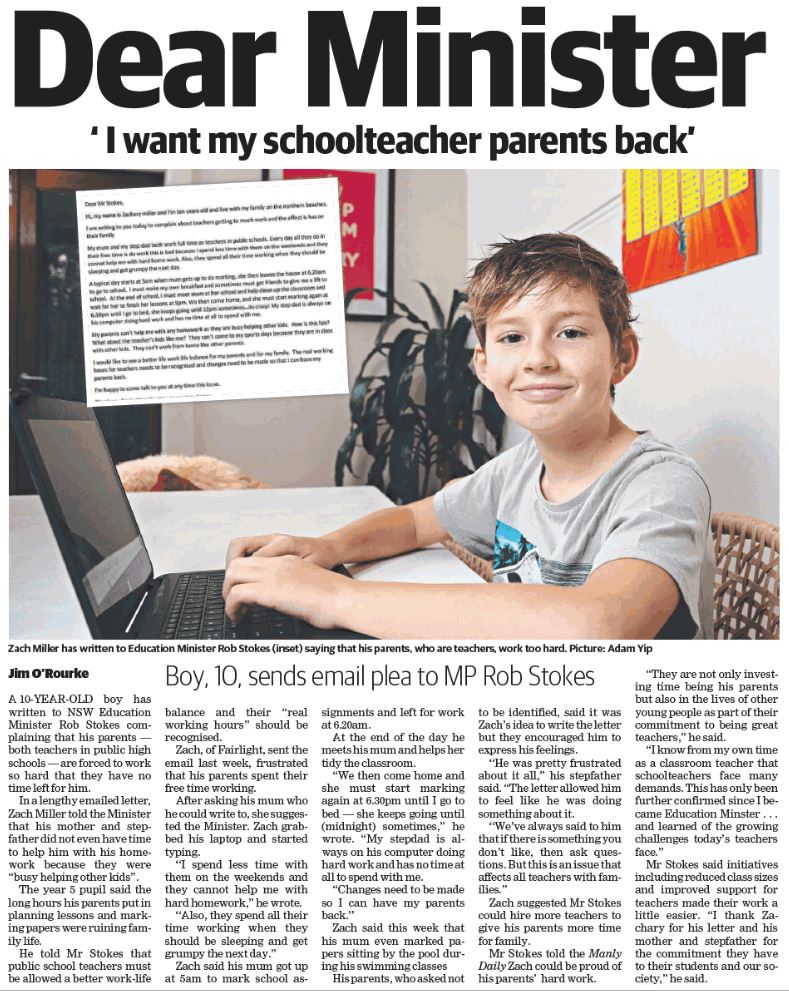 A 10-year old boy has written to NSW Education Minister Rob Stokes complaining that his parents – both teachers in public high schools – are forced to work so hard that they have no time left for him.

In a lengthy emailed letter, Zach Miller told the Minister that his mother and stepfather did not even have time to help him with his homework because they were “busy helping other kids”.

The year 5 pupil said the long hours his parents put in planning lessons and marking papers were ruining family life.

He told Mr. Stokes that public school teachers must be allowed a better work-life balance and their “real working hours” should be recognized.

After asking his mum who he could write to, she suggested the Minister. Zach grabbed his laptop and started typing.

“I spend less time with them on the weekends and they cannot help me with hard homework,” he wrote.

“Also, they spend all their time working when they should be sleeping and get grumpy the next day.”

Zach said his mum got up at 5am to mark school assignments and left for work at 6.20am.

At the end of the day he meets his mum and helps her tidy the classroom.

“We then come home and she must start marking again at 6.30pm until I go to bed – she keeps going until (midnight) sometimes,” he wrote. “My stepdad is always on his computer doing hard work and has no time at all to spend with me. Changes need to be made so I can have my parents back.”

Zach said this week that his mum even marked papers sitting by the pool during his swimming classes.

His parents, who asked not to be identified, said it was Zach’s idea to write the letter but they encouraged him to express his feelings.

“He was pretty frustrated about it all,” his stepfather said. “The letter allowed him to feel like he was doing something about it.

“We’ve always said to him that if there is something you don’t like, the ask questions. But this is an issue that affects all teachers with families.”

Zach suggested Mr. Stokes could hire more teachers to give his parents more time for family.

Mr. Stokes told the Manly Daily Zach could be proud of his parents’ hard work.

“They are not only investing time being his parents but also in the lives of other young people as part of their commitment to being great teachers,” he said.

“I know from my own time as a classroom teacher that schoolteachers face many demands. This has only been further confirmed since I became Education Minister… and learned of the growing challenges today’s teachers face.”

Mr. Stokes said initiatives including reduced class sizes and improved support for teachers made their work a little easier. “I thank Zachary for his letter and his mother and stepfather for the commitment they have to their students and our society,” he said.